Made sure I got there on time so I could get a "good spot."

Water ranges from 3 to 5 feet deep. Workout is most efficient with water at chest level. If it is too deep, you just kind of float away. Too shallow, you don't get the necessary resistance. Everyone tries to find their best depth on a first come, first served basis.

Except the two latecomers...

They wade in, after class has started. Pick up their equipment and casually push themselves into the middle of the group, carving out space for themselves, assuming that if they do it with smiles on their faces no one will notice object.

So I move one step over, two steps over. Ten feet later, yup, it's official, I'm a "floater."

After class we head for the showers. No one is leaving before they wash the salt & chlorine off. Four showers. The line forms to the rear. A little chilly standing there with wet suits on but shouldn't have to wait too long...all the ladies are quickly hopping in and out again, except...

Is someone drying off and dressing in the first shower?

Note: There are towels, benches in front of the lockers, and individual changing rooms for the modest. Signs encourage club members to refrain from using the toilet stalls for changing. Most people assume that applies to the showers also.

The curtain is finally pulled back and who should emerge? Yes, one of our "late comers." Again with the big smile and a, "Ohhh, look at the line!" As she walks blithely past the wet, shivering women still waiting to shower.

At least she's consistent.
Posted by CAT at 10:25 AM No comments: 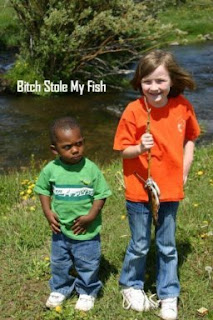 Random Internet photo. Apparently their folks snapped the camera at just the "right" time and the look on his face is priceless. Some wag added the caption later. Still laughing.
Posted by CAT at 9:03 AM No comments:

Oh the season of apples.

Farmers here are scrambling to get their last apples off the trees. Frost hits in the mornings and they have to wait until it warms up to pick. You can almost hear the ulcers growing.

Meanwhile, the rest of us, wait anxiously for those yummy fruits. We're waiting to bake them, dry them, or fry them.

Some of us are just waiting to munch them.

Especially "horse people." A certain blond waits at the barn door every afternoon, a froth of wild mane flipping in the air as she waits impatiently for her treat.

There is a price to be paid tho - I purse my lips, make a kissing sound and a velvet nose swings up to my face for a smooch which is quickly exchanged for a nice, juicy apple.

And, if I'm real quick I can get out of the way before she wipes her apple slobber all over me.

Retribution, I think, for apple blackmail.
Posted by CAT at 6:14 PM No comments:

A good friend of mine was really, really frustrated recently. A local Burbank kid had made the newspapers...but not in a good way.
"Why don't people just tell their kids NO!?" She asked.

She has a point. "No" doesn't seem to be a popular concept in current parenting handbooks.

Later, I was skimming a local gal's blog. We all have our niches. Some are mommy blogs, some political, some humor, some art....

So this was a mommy blog, grown up.

It was well put together. Had a nice visual presentation. She focused on the positives in her life and her current passion. But it was rather entertaining in a sense that she probably hadn't intended.

I know her. She is a decent enough woman but her kids are a bit of a handful. The pictures on the blog are of the kids I know...

The descriptions are...well, the kind of descriptions that only a mother, blind to the faults of those children, could provide. She is one of those mothers that, the moment one of her progeny gets into trouble, immediately starts her rebuttal sentence with, "Not my kid!"

Quite frankly, to the rest of us, the boy is looking like a future reform school candidate and the oldest girls seem to be vying for roles on the next remake of "Mean Girls."

But I don't want to mess with her illusions.

I just hope she gets it all worked out before they leave home and inflict themselves on the rest of us.
Posted by CAT at 3:02 PM No comments: 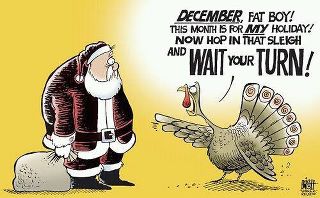 Stopped at Taco Bell for lunch today. The deep, dark recesses of my soul just said...Mexican!!!!

Was in the drive thru right behind a SUV with darkened windows. As it pulled up to the pick up window, something started to wave frantically in the back window.

A kid waving at me?

Apparently, he liked Mexican too.
Posted by CAT at 3:58 PM No comments:

A Thought To Keep In Mind

I believe is was Walter Scott who said, "Oh, what tangled webs we weave, when first we practice to deceive."

Ya know...I'm reminded of how much easier it is to tell the truth. That way you don't have to try and remember what you said or to whom.

And trying to massage a situation so it becomes a convenient truth?